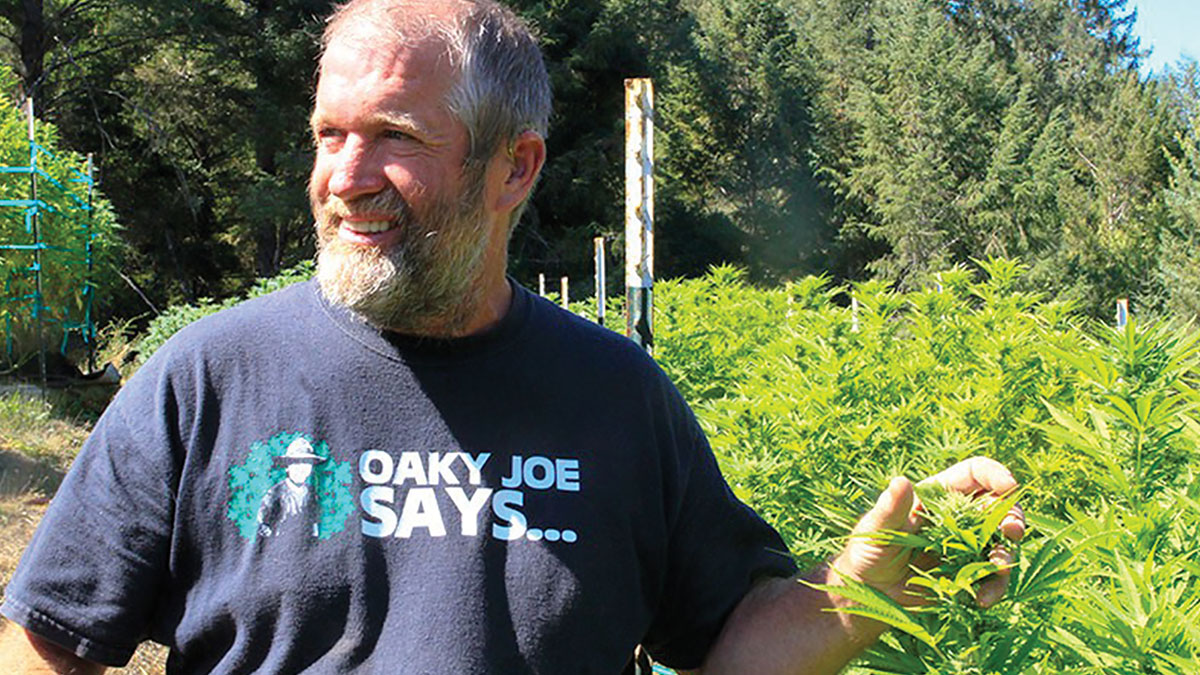 Over the past 40 years, we’ve had Republican presidents and Democratic presidents. A great deal has changed, locally, nationally and globally. Generations have come and gone. One thing that hasn’t changed, not even during the height of the War on Drugs, is that the “Emerald Triangle” is the primo cannabis growing region in the world.

All through the pot prohibition—and despite raids, arrests and the confiscation of crops—growers kept growing. They’re still growing; in fact, more than ever before, on both the illicit as well as the legal market. Yes, the war on drugs disrupted lives and upended families. 60 Minutes aired drug-boogeyman stories which alarmed law-and-order citizens while at the same time providing free advertising for growers and traffickers. But the war did little if anything to stop what morphed from the hippie counterculture into a lucrative capitalist enterprise.

In the late 1970s and early 1980s, before anyone began to call it “The Emerald Triangle,” I watched the cannabis story unfold up close, in real time. These days, I live in Santa Rosa, now a major marijuana manufacturing and distribution hub. I often travel to the heart of the Triangle—a 90 minute drive—to renew my contacts and gather information. I’m sometimes accompanied by Joe Munson, who has cultivated all over the Emerald Triangle and has never had a permit.

“It’s my form of civil disobedience,” he tells me. “I refuse to adhere to immoral laws.” He’s been arrested 50 times.

No one has ever come forward to claim credit for the moniker “The Emerald Triangle,” which was surely meant to echo the phrase “The Golden Triangle,” the heroin-producing area in South East Asia. It’s now just as well known around the world. Fly to Amsterdam, as I have done, and talk to Dutch pot smokers and chances are they’ll know it.

Thanks to feature films like 2008’s Humboldt County (2008), and books like my own Marijuanaland: Dispatches from an American War, potheads everywhere even know the names of the counties in the region, once called the “Redwood Empire” because of the giant trees and the logging industry that chopped them down and carted them away. Made up of thickly wooded mountain ranges like the Yolla Bolly, and extensive valleys for cattle ranching, the Triangle boasts towns and villages like Garberville, Willits, Hearst and Alderpoint, all of them economically dependent on cannabis.

In the 1980s, when logging declined dramatically and working men lost jobs in forests and mills, they turned to cannabis. Ray Raphael tells that story in his oral history, Cash Crop: An American Dream. Three-and-a half decades since then, the Emerald Triangle is still synonymous with cannabis. If you’re smoking weed, chances are good it was grown in Humboldt, Lake, Trinity or Mendocino counties, where seasonal workers known as “trimmigrants” labor during the harvest and make $15 an hour. I recently met 50 of them on one plantation—all from Argentina.

The area actually isn’t in the shape of a triangle, but rather a rectangle which runs not just north and south, but also from the Pacific Ocean in the west to Interstate 5 in the east, a distance of about 160 miles, which cuts across rough terrain and through isolated communities like Hayfork and Hyampoon where summers are hot, winters cold and big box stories haven’t yet left a footprint.

I first became aware of the size of the Emerald Triangle when former Mendocino County Sheriff Tom Allman unfolded my AAA map of Northern California, spread it across his desk, and with a magic marker outlined the area about the size of Massachusetts, much of it only accessible by helicopter. He even circled the area he had targeted for raids. There was no way I could warn anyone.

Allman believed in upholding the law, but he also believed in changing specific marijuana laws. During his time as sheriff, weed was illegal in the eyes of the federal government. It still is. Allman created a cannabis program in Mendocino County: Growers enrolled, paid a fee, received plastic ties which they wrapped around their plants, and posted an official sign at the entrance to their garden that proclaimed it a legal grow. Not surprisingly, people from all over the U.S. and the world flocked there to grow marijuana, just as they had flocked to California to pan for gold in the 19th century.

One summer, Allman told me jokingly that he was “running a model United Nations in the jail.” He and his deputies arrested and incarcerated people from Hungary, Bulgaria, Sweden, Argentina and Laos who arrived in his neck of the woods to strike it rich. Not surprisingly, the federal government shut down Allman’s program.

Fast forward to Proposition 215, which ushered in the era of medical marijuana, and Proposition 64, which inaugurated “adult use.” Now, cultivating cannabis is legal if farmers jump through hoops, pay money to state and local agencies, and adhere to environmental regulations. If they don’t, gun-toting officers from Fish and Wildlife can and do raid, confiscate and levy fines. Growers call it “Prohibition Lite.”

Marty Clein, a Florida native, cultivates cannabis legally in Mendocino. He settled there in part because of Sheriff Allman and because the county seemed friendlier to pot than Sonoma County, where he worked in the wine industry. Sonoma boasts high-end tasting rooms, restaurants, breweries and movie houses, but it also has a reputation as a place where wannabe cannabis farmers are discouraged by little men behind big desks.

I have never found the proverbial smoking gun or CCTV footage that shows county officials conspiring with vintners, but I have heard rumors. Most grape growers and winemakers I’ve met don’t want economic competition from cannabis, though some famed grape growers and winemakers, such as Phil Coturri and Mike Benziger, cultivate cannabis. They’ve come out of the cannabis closet and have endorsed the plant they love.

Clein quit the wine industry and moved to Mendocino County, under the assumption that county officials there wouldn’t “shit on growers” as they did in Sonoma County. “The Green Rush”—the cannabis counterpart to the Gold Rush—helped to jack up the price of land. Newcomers like Clein had to push into the backcountry, which was beautiful if you liked quiet, dirt roads and few if any neighbors. More than one grower took the code name “Lone Wolf.”

Clein, who calls himself “Martyjuana,” grows weed in the hills above Covelo, a town known for violent crime and federal raids of illegal cartel grows. I first explored Covelo in the 2010s when I visited a cannabis farm operated by a husband and wife from L.A. who cultivated their crop in plain view and who were arrested and locked up. They bailed out of jail and out of the industry.

Clein and his partner Byron Koehler have the legal paperwork for their operation, “Big B’s Martyjuana Farm.” Their flowers and pre-rolled joints are sold in dispensaries around California. They make money, but they plough most of it back into the business.

When I last visited Clein and Koehler with Joe Munson, they were in the midst of the 2020 harvest. Some plants were still in the ground, others had already been cut down. Branches were hanging to dry and cure. Manicuring was taking place and vegetables for a late lunch were sautéing in a skillet in an outdoor kitchen. It was hot and dry. Fires raged not far away, destroying acres of cannabis, but there was no damage to the crop at “Big B’s Martyjuana Farm.”

Clein and Koehler cultivate organically in the sun in a 10,000-square-foot area. That’s not much when compared with the commercial operations in the Central Valley, which are making life hell for small and medium-sized growers. If Clein doesn’t succeed in cannabis, he says he can go back to the wine industry. Koehler says he can return to his life as a fisherman and diver for sea urchins.

When I originally went to Mendocino as a reporter 40 years ago, pot farmers said media attention would mean police raids and the end of their lifestyle. Mendocino County Sheriff Tom Jondhal, who preceded Allman, told me, “We only arrest about 10% of the growers. If you write about me, you’ll make me look bad.” Reporters were the least of his problems. Cops in New York, he explained, phoned to tell him they seized weed in packages labeled “Product of Mendocino.”

I’m thankful Clein and Koehler welcomed me to their Emerald Triangle farm, where the grass isn’t greener than the grass in Sonoma County or elsewhere, but where there’s less red tape and where the sky is often blue all day. You can bet that folks who want a piece of the American Dream will go to Mendocino and join the cannabis crowd—but it’s awfully late in the game.

Jonah Raskin is the author of ‘Dark Past, Dark Future: A Tioga Vignetta Murder Mystery.’