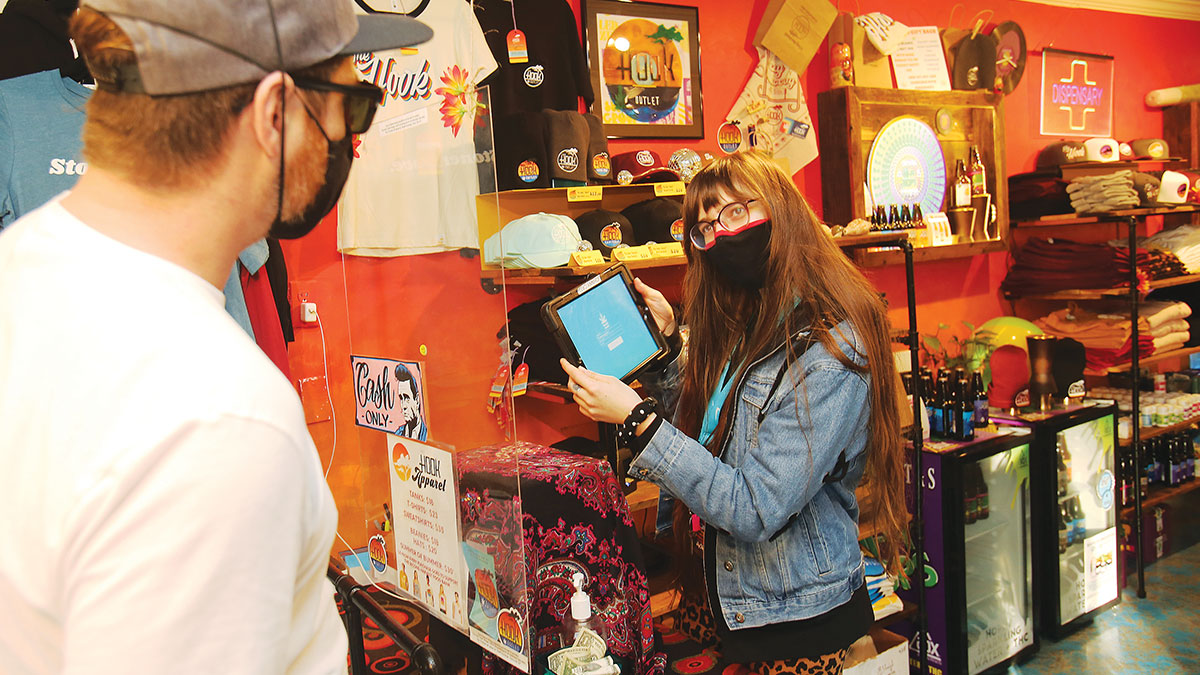 The first-of-its-kind Hook Dispensary Outlet opened its doors to the public in April—right after Covid-19 cases started to spike and the state issued a sweeping shelter-in-place mandate. Things could have gone very wrong for the humble weed shop. But the Hook team weathered the storm, and as the world began to collapse around it, the store began to thrive.

“Setting up shop during a pandemic has been interesting to say the least. It was nerve-racking and stressful in the beginning,” Blackney says. “But Covid-19 is ‘normal’ for us. The distance, the mask wearing—it’s funny, but it’s like business as usual. People are losing their jobs, and it’s hard for a lot of folks. Ourselves, though, we’re doing well and growing.”

A proud CBD tincture-and-topical fan, 26-year-old Blackney jumped headfirst into the world of cannabis a little over six years ago. A life-changing and fully-transformative trip to Peru birthed an obsession with holistic healing and the magical possibilities of plant medicine—cannabis first and foremost. Her time in South America was the reason she became a budtender, and eventually teamed up with co-owners Kyle Giorchino and Bryce Berryessa to build and mold the Hook into what it is today—and to realize a collective dream.

The idea for The Hook was in the works for many years. Giorchino and Berryessa, both pioneers in the industry, envisioned a place that was “like the good ol’ days”—a full-on tie-dye filled throwback to the 1970s that paid tribute to simpler times.

What would truly set their fledgling operation apart, distinguishing it from other dispensaries in a rather competitive industry, would be their prices. This unique take on the outlet concept consistently offers some of the best cannabis deals in the Bay Area. The smallish store, next to an insurance company and Pizza My Heart, is attracting a steady stream of new customers each day.

“We’ve become the one dispensary that is in direct competition with the black market,” Blackney says. “We’re challenging and reinventing the system—much like Grocery Outlet does. It’s thrilling finding something you absolutely love and have to have, for way, way less.”

The Hook has the potential of being a bit of an industry disrupter, and many of the larger players in the cannabis game are watching it closely, evaluating its business model and day-to-day operations.

“The entire industry is sort of a giant startup, and this is a great time for creation and innovation,” Blackney says. “We’re pushing the boundaries of what’s possible.”

The Hook carries a core and semi-permanent selection of high-grade flower, concentrates, edibles, and topicals. But almost every day, there are new and exciting goodies rotating through the store’s wooden shelves.

The Hookfolk are proud to be a part of the vibrant Santa Cruz County community and blessed with a bounty of local, available canna-goods. They make it their mission to partner with and stock as many close-to-home brands as possible.

“It’s an industry based on relationships,” Blackney says. “And we’ve developed the best relationships with vendors and cultivators across the board. There’s an extensive menu at our fingertips.”

Most of the dispensary’s products and brands are mixed and matched semi-regularly, but the dispensary does have a list of core partners—including La Vida Verde (tinctures and edibles) and Skunk Feather (vape cartridges).

“We work with a lot of companies and are 100% flexible. We’re pleasantly surprised that so many people are able to work with our model. We sell things at a discounted rate,” Blackney explains.

A botanist by trade, Hook GM and “Chief Haggling Officer” Stephanie Kimitsuka spent five years in the pharmaceutical industry before jumping headfirst into the cannabis biz. Weed is medicine to Kimitsuka. Weed is life. She spent the last five years developing close bonds with many companies (local and across the state) and uses these close relationships to negotiate the best possible deals.

Kimitsuka, fondly referred to as “a ninja of finding new products” by Hook staff, possesses an innate sense of what will work and what won’t. Companies are constantly clamoring for limited shelf space at the store.

“Here, the shelves are incredibly curated. I’m happy to take a chance on something if the price is right,” Kimitsuka says. “Take SC Roots and Firecut, for example. Both are local companies, and both settled on a favorable price with us. I don’t mark their cannabis up, so they are hot sellers here. LOLO has been with the Hook since day one, and their ready-to-roll (pre-shredded) bags fly off the shelves. 21 grams for $35. We rotate stuff all the time, too. Some products, you might never see it again–we’re an outlet.”

Kimitsuka prefers to work with local vendors and distributors whenever possible. Some 66% of the Hook’s revenue is generated by local companies from Santa Cruz, Watsonville, Moss Landing, and Salinas. Spending money locally promotes the local economy and saves the Hook’s partners money on gas and delivery time.

Loyalty is a major factor in the Hook’s pricing and why the outlet can offer amazing daily deals on a variety of canna-goods. Around 64% percent of its revenue comes from only five distributors, four of them local. Loyalty ensures that the store is getting deals offered to no one else in the industry, and consistently receiving heavy brand support.

“Our markup is much less than other retailers,” Kimitsuka says. “If you give me a discount, I’ll discount your stuff, too. We and our partners have a two-way commitment to lower prices.”

By keeping her prices consistently low, her customers are able to stock up.

“When the market went from medical to recreational, taxes and regulations made cannabis completely unaffordable to many people. These people did not stop using cannabis, they went to the black market,” Kimitsuka says.

California has quickly blossomed into the largest pot paradise in the world, boasting nearly $3 billion in sales in 2019 alone. Sounds pretty impressive, until you realize that an estimated 80% of transactions take place on the black market.

Black market operators raked in an estimated $8.7 billion in 2019, according to a report by BDS Analytics. That’s more than three times California’s legal market. If Proposition 64 (2016’s voter initiative to legalize cannabis in California) was passed to destroy the illicit cannabis market, it failed. In many cases, expensive regulations have made the black market more profitable than going legitimate. And demand for untaxed, unregulated, untested, underground herb has never been stronger.

As of now, the heavy costs of testing, packaging, and taxes are all passed on to the average cannabis consumer. The price gap between black market and legal cannabis is 65% in Sacramento, 49% in Oakland, and 45% in San Jose.

“Since opening, we have heard many people say that it was the first time they had shopped at a cannabis dispensary since legalization,” Kimitsuka says.

The Hook’s pricing is even low by Kimitsuka’s own metrics. Before becoming the dispensary’s official “buying ninja,” she herself was a grower of fine flower. “Thirty dollars was my friend-hookup for an eighth,” she says. Today, an eighth of Firecut flower will run you $13 at the dispensary.

The team has plans to expand in a number of ways—to bring new Hooks to underserved areas where people cannot otherwise afford legal cannabis. They may face an uphill battle, though. It’s tough to enter into, let alone succeed in, the legal cannabis business in California. And legal and fully legit companies like the Hook face a toxic mix of ridiculously high taxes, little to no access to federal banking, the current Covid-19 crisis, and skyrocketing compliance costs.

“Between the state and Santa Cruz County taxes, it’s way, way up there. Like 37%. Taxes on alcohol and tobacco aren’t that high,” says Kevin Flahive, budtender at Redwood Coast Dispensary in Ben Lomond. “When things became recreational, the amount of regulation and fees increased fivefold. It hurts. Just this year, the state increased the excise tax by another 3%. The increased regulations and paperwork make it hard on everyone.”

The Hook’s flagship Capitola store and unique business model may set them apart from other dispensaries, but entering into new markets and cutting red tape while facing an unsettling and rapidly changing macroclimate could be a tall order.

For now, the team at the Hook Outlet is sanguine about the future and doing all they can to promote more affordable and accessible cannabis.

“In the end, weed is medicine. It should be a priority to provide it affordably. It’s especially important right now with the unrest, fires, and Covid-19. We are the one store that offers prices that can compete with the black market,” Blackney says. “I believe in cannabis as a healer. It gives you what you need for your body and your mind. It’s been a miracle for me, and so many people.”