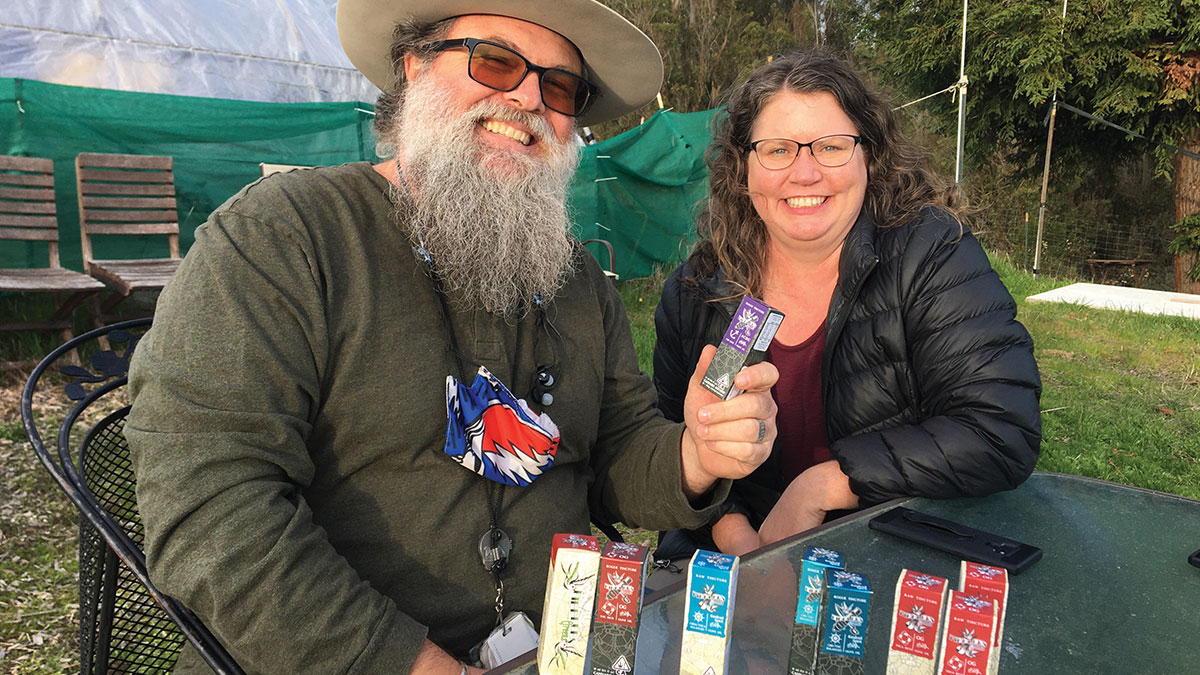 Reflecting on the ups and downs of a rapidly shifting industry

Nobody knows the wacky world of the cannabis dispensary better than big, bearded, jovial Cameron Hattan, though he hasn’t ever owned or operated a dispensary—and doesn’t want to. For years, he was a pioneering cannabis farmer. Now he’s a cannabis salesman extraordinaire who works with rural farmers in the North Bay and brings their products to urban markets in the South Bay and beyond.

“Getting weed on the shelves of a dispensary is one of the most difficult things in the world,” Cameron tells me. “The cannabis industry is like no other. You can’t use banks or credit cards. Everything has to be in cash.”

Cameron and I and his wife Shannon are sitting outdoors on a chilly, overcast day. After a rain, the hillsides are bright green again, and that makes all three of us happy. Cameron, who is a natural-born talker, gazes into the distance.

“For years, I knocked on a dozen California dispensary doors a day. I’ve been to hundreds of them,” he says. “In the early days, many kids who worked behind the counter had no retail experience, though they had smoked dope.”

Cameron pauses a moment and catches his breath. “Prior to the passage of Prop. 64 in 2016, dispensaries were poorly marked and hard to find,” he says. “After Prop 64, purchasing shelf space became the norm. If you didn’t pay, your products weren’t carried or were stacked in a dark corner.”

For nearly a decade, Cameron and Shannon cultivated marijuana for the medical cannabis market ushered in by Prop. 215, which California voters approved in 1996. The Hattans were the first licensed cannabis growers in Sonoma County, focusing primarily on CBD-dominant strains. When their business expanded, they partnered with other “legacy” growers and grew a portfolio under the Fiddler’s Greens brand that they created. Fiddler’s Greens is thriving, as is their distribution company High Tide. But given the vagaries of the market, sometimes it feels like low tide.

Shannon looks me squarely in the eye. “Nobody in the industry up here is making money,” she says.

David Drips, a neighbor, echoes Shannon’s comment, though he’s happy that High Tide distributes the primo weed he grows in hoop houses on a windy hillside west of Petaluma in Sonoma County.

I visited Drips soon after St. Patrick’s Day, when he was getting ready to plant 13,000 seeds on his 300-acre farm. Along with Zac, his partner, he was fixing a tractor so he could till the soil. To be a successful pot farmer these days, it helps to be a mechanic.

While Drips and his partner tinkered with the tractor, a Latino field worker who spoke far more Spanish than English spread compost with a shovel. For decades, the land had been home to roving herds of cattle, which meant that the soil was already rich in nutrients.

Why does Drips go on growing weed if he isn’t making big money? Is he insane? No—in fact, I don’t know many folks saner than he, as I’ve learned by talking to him about the last presidential election, the pandemic and local pot politics. Also, Drips has a dream. He loves weed and he loves working outdoors. A veteran who did three tours of duty—in Kosovo, Afghanistan and Iraq—he doesn’t give up. Not without a fight.

Drips and the Hattans are doing what small and medium-sized growers and distributors are doing all over California—banding together, pooling resources and information. It may be the only way to survive the onslaught from corporate cannabis and big money.

Another grower, who has won tons of awards for the best weed at the Emerald Cup, told me, “The corporate cannabis guys push and shove in places where a little stoner/grower can’t push or shove very much if at all. It goes to show that, with the right people at the right time and right place, you can sell anything, including shit weed.”

Shannon Hattan never signed up for a tour of duty or went to war. But she has been around the block several times and has a wealth of experience, plus heaps of savvy about human beings. Shannon grew up in Texas and went to college at Texas A&M. In the mid-1990s, for a class project, she did research on cannabis, which led her down a rabbit hole and into the marijuana wonderland. She met Cameron in the Virgin Islands, where he worked as a bartender after a stint with the Marines. Cameron and Drips both have marijuana and the military in common, though there’s not much of the military about them anymore.

A long and windy road brought the Hattans from the Virgin Islands to the hillside in Northern California, where they cultivated cannabis for their own health and wellness. They are a rare breed, indeed, who transitioned from the illicit to the regulated market, with taxes and a bureaucracy, that decimated a thriving community of cannabis farmers. Like the Hattans, Drips refuses to go under.

While he tills, ploughs, plants seeds and harvests, the Hattans spend much of their time educating the public—and employees at dispensaries—about a plant they’ve come to love and respect. Their compassion makes them ideal educators. You can’t go wrong if you try Fiddler’s Greens weed, which is available through 7 Stars in Richmond and through QualiCann, a cannabis delivery service based in Oakland. If your local dispensary doesn’t carry products from Fiddler’s Greens, ask for them and tell them the Hattans sent you.

When I visited Drips at his farm, right after St. Patrick’s Day, he had just put down his beloved canine, who went by the name Hound Dog. Drips dug a grave, laid Hound Dog in the ground and covered him with earth. That morning, right before I left his wind-swept hillside, he used his own weed to roll a bodacious joint. He handed me the fatty and said, “You can lick it.” We still weren’t taking risks. Drips handed me his lighter. I fired up the joint, and took a puff, just enough to take the edge off. Drips went back to work. I drove home a sober and happy camper. A morning with a cannabis farmer always elevates my mood.

Jonah Raskin is the author of “Marijuanaland: Dispatches from an American War.” He writes the cannabis column for the North Bay Bohemian and the Pacific Sun.