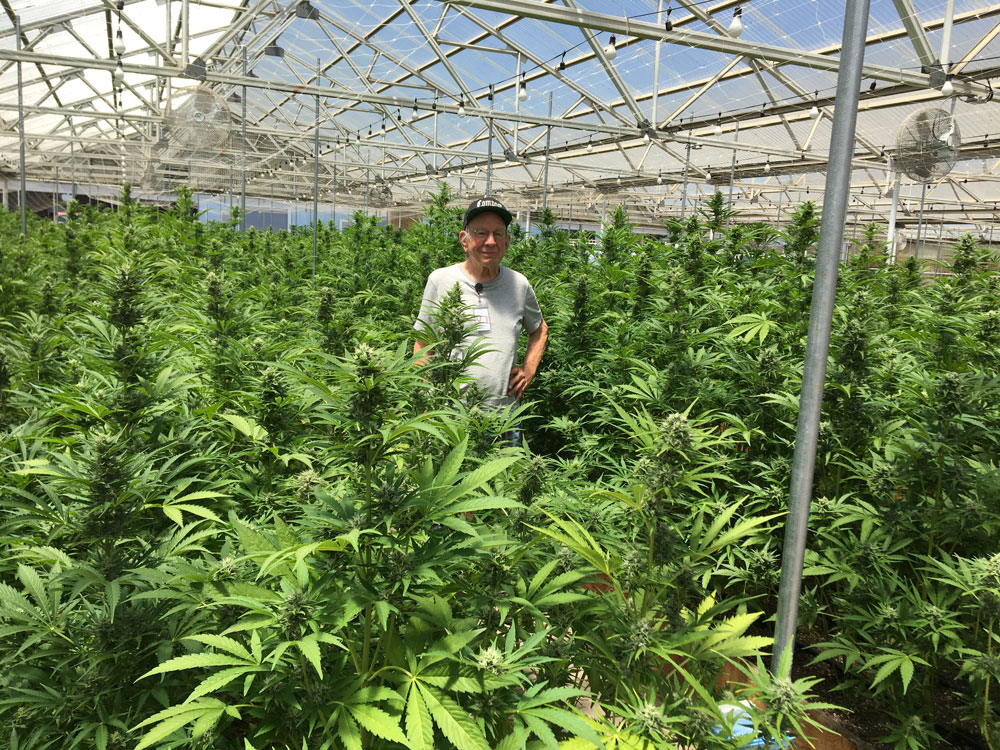 It was a Monday morning, and Marijuana Man (MM) was feeling chipper. I had taken I-280 to Highway 17 to MM’s two-story, book-lined house in Santa Cruz. MM and I both have Ph.Ds. There aren’t many of us in the cannabiz, though our degrees don’t help with cultivation.

MM knows nearly all there is to know about the cannabiz. He grew his first crop in ’75. A natural born storyteller, he has a green thumb and an innate ability to cut through yellow and red tape.

“My first crop was killer weed,” he says. “Unfortunately, I had to move it when a crew from PG&E spotted it. I didn’t want to be popped.”

Before MM grew weed in Soquel, he smuggled weed. Tim Blake, who created the Emerald Cup, did much the same. The coast of Santa Cruz County is ideal for small boats that can evade the Coast Guard.

MM has never gone to jail. He doesn’t want to go to jail now. He’s not entirely legit, which is why I’m not using his real name or pinpointing his address.

For an hour or so, we sat in the sun and talked about our writer friends: Jim Houston, who wrote Farewell to Manzanar with his wife Jeanne Wakatsuki; and Leonard Gardner, the author of the masterpiece Fat City. The Central Valley and the Central Coast grow good writers, as well as good weed.

MM and I climbed into his BMW and drove south to visit “the Farm” in Pajaro Valley, where he oversees the whole operation. By the time we arrived, the fog had retreated, the winds had abated and the sun was out in force. I saw acres of aromatic lavender and rosemary and watched the field workers harvesting those two herbs. Also, I met MM’s partner in his office, where he had an enlarged photo on the wall of Frank Sinatra’s mugshot from 1938. Sinatra was arrested and charged with adultery—later dismissed.

The law could never pin anything on Sinatra, which is one reason MM and his partner admire him. Sinatra did it his way. So does MM. Together, we toured a vast series of greenhouses, where acres of weed were growing and where workers were moving plants from small to large containers. I could smell it before I saw it. Elsewhere, thousands of plants were flowering, fans whirling and the temperature just right.

One of the women who kept a close eye on the workers tells me, “I only have one speed this time of the year: ramrod.”

I say, “Yeah. Gotta have continuous production.” She nods and explains that she has worked in agriculture her whole life, and that most of the weed cultivated, harvested, bucked and trimmed at the Farm goes to L.A. She calls it one of the most “ravenous weed markets in the world,” and adds that L.A. people are “chi-chi.”

In the 1980s—the hypocritical “Just Say No” decade— I sold weed at $4,000 a pound to the chi-chi crowd. I stayed for a couple of weeks at a time on the Beverly Hills estate of movie mogul Bert Schneider, who produced Peter Davis’ award-winning Vietnam doc Hearts and Minds and Bob Rafelson’s classic Five Easy Pieces. Bert had the best cocaine and excellent California “sensimilla,” as it was called in those days, before “sativa” and “indica” came into use, and before growers talked about THC, CBD and terpenes.

Nearly everyone I met in L.A. dressed like a movie star. Hair right. Fingernails, eyeliner and designer clothes right. Nobody at the Farm dresses like a movie star—certainly not MM, his partner or the woman in ramrod mode who wore jeans, a denim shirt and boots.

MM tells me: “I went through thousands of acres of greenhouses in Santa Cruz County and down dirt roads in my Jeep. I chose this location because it had the most reasonable taxation and promised to be the fastest to license and permit. Even then, it wasn’t that fast.”

Months later, the paperwork still has to be completed, in large part because the County of Santa Cruz and the State of California are at loggerheads. The county wants to give the green light to cultivation sites. The state wants to slow down the growth of the industry. It’s much the same story in other parts of California, where the local authorities are a lot looser than the bureaucrats in Sacramento.

MM wanted to eat at the Whole Enchilada, but it was closed so we settled for Phil’s Fish Market, which was packed. An hour later, back at the Farm, MM picked out two lavender plants and two rosemary plants and gave them to me.

They’re now in the ground in my backyard, along with the two marijuana plants I transported in the back seat of my car. “Don’t worry, it’s legal,” MM said when he saw the worried look on my face. The woman in ramrod mode gave me a jar with a strain called “Pai Gow”—which is the name for a popular Chinese game, played with dominoes or with cards—and another strain called “White Bubba Haze.” Later this year, both strains will be available in dispensaries across California.

Not long ago, MM borrowed a phrase from Mao Zedong, the Chairman of the Chinese Communist Party, suggesting that one of the strains be called, “Let a Thousand Flowers Bloom.” That idea didn’t fly, though marijuana is a flower, and though thousands of marijuana plants bloom year-round at the Farm.

At home the next day, I smoked the “White Bubba Haze.” Fast-acting and mellow, it got me pleasantly high, but didn’t prevent me from sitting at my desk and writing. After a break to cleanse my palate, I tried the “Pai Gow.” With scissors, I cut up a few buds, crumpled them with my fingertips, rolled a modest joint and enjoyed the taste of the terpens.

A few weeks later, I flew East, visited a couple of dispensaries on the other side of the continent, and talked to consumers, budtenders and a farmer in his 40s who made cannabis his religion when he was a teenager, and who still worships at the cannabis altar. “There’s very little law enforcement if you grow your own,” he says. “It has been difficult for the supply to keep up with the demand.”

Cannabis is not yet legal in parts of the East, including New York, Pennsylvania and Delaware, so consumers drive to Massachusetts, where pot tourism thrives. No two of the six New England states—New Hampshire, Maine, Vermont, Massachusetts, Rhode Island and Connecticut—have the same cannabis rules and regulations. In that regard, they’re like California, where each county has its own game plan.

The East Coast under the influence of cannabis can be as lovely a place as the Left Coast under the influence. New England dispensaries congregate in wealthy communities, where families have more disposable income and more potential for sizable tax revenue. At “Theory,” a dispensary in Great Barrington, Massachusetts, I bought a couple of joints, smoked one of them and was quickly stoned.

It’s comforting to know one doesn’t have to transport weed on a flight and risk an arrest. Hip-hip hurray. Now, we’ll have to wait for Alabama and Mississippi to legalize. Meanwhile, smugglers come to California, buy hundreds of pounds, transport it across the U.S. and deliver it to the Deep South, where folks are always eager for Golden State weed.