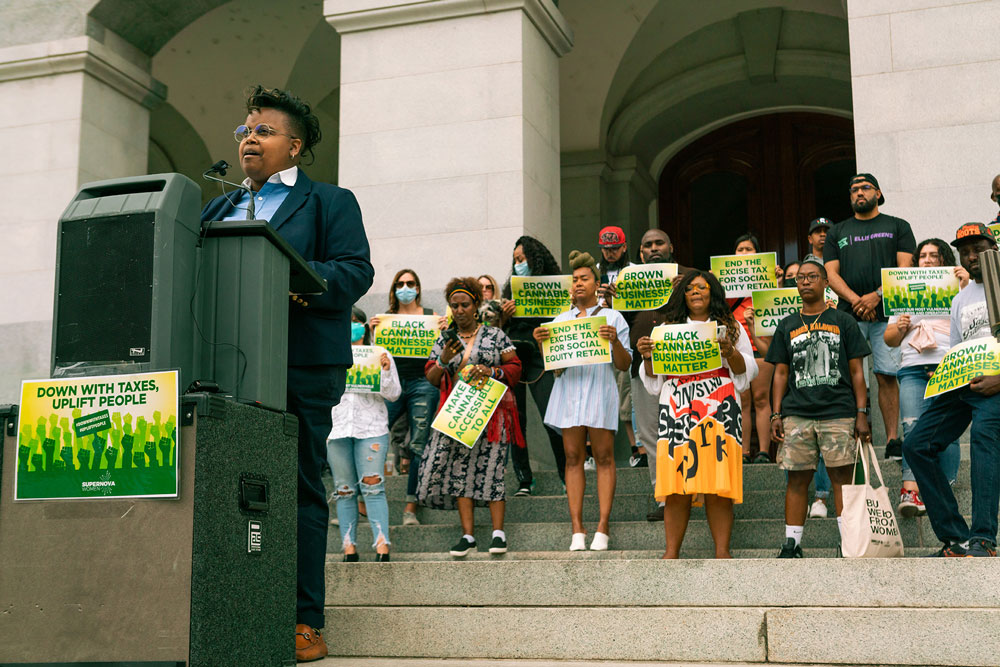 On June 2, a rally was organized at the California State Capitol in response to inadequate cannabis tax reforms recently proposed by Gov. Gavin Newsom. The event was organized by Supernova Women, an advocacy and networking group for people of color in the cannabis industry.

1) As much 67% of revenue from the sale of legal cannabis comes straight out of the till to pay for local and state taxes. That’s before paying for staff, rent, marketing, insurance and other fixed costs. For those unfamiliar with common business accounting, running a business and paying ALL expenses “before taxes” on 33% of your sales revenue just does not add up. If you tried to submit that business model in business school, you’d be laughed to the curb.

And yet here we are, taking an incredibly popular industry created by the will of the people via Prop 64 and making it impossible to play in except for the most well-funded, economy of scale leveraging, out of state corporations.

3) Social equity programs have been created through cannabis policy in an attempt to repair some of the harm caused by enforcement of the “Drug War,” which has from the start fallen unevenly on people of color. These local programs provide ways to offer benefits like tax relief and priority licenses to those most directly affected by the legacy of policing cannabis use in black and brown neighborhoods.

The solutions called for by Supernova Women and industry advocates

1) Suspend the excise tax for Social Equity Retailers. Let people open viable retail businesses in their own neighborhoods. This would be a 15% reduction in cost right off the top, allowing for some wealth creation, the kind that BIPOC folks can pass on to the next generation. Justice in dollars, man.

2) Reduce all excise tax to 5%. The state of California has a massive cash surplus right now. Cut the state-wide excise tax for all recreational cannabis. We don’t need the extra money sitting in a vault; we need the access that the people of California have twice voted to increase.

3) A statewide definition for Social Equity. The legal cannabis market is the opportunity of a generation to redefine the economic opportunities for communities that have long been deprived of a fair shake. For too long, the primary funding sent into these communities has gone to expanded policing. A statewide definition of Social Equity will serve to guide not just policy but attitudes toward black- and brown-owned businesses.

Gov. Newsom’s recent proposal to eliminate the cultivation tax and shift excise tax collection from farmers to retailers isn’t seen as having a significant enough impact. Sam Rodriguez, policy director of Good Farmers Great Neighbors, said as much, although very respectfully, in a recent article on the cannabis news platform Marijuana Moment: “We look forward in working the budgetary process to obtain more tax relief necessary to stabilize the supply chain… Anything less will potentially devastate the newly created cannabis economy.“

There are allies in government who understand the vital importance of these needed changes. SB 1281 and SB 1293, bills introduced into the state Senate by Sen. Steven Bradford of Senate District 35 in Los Angeles County, call for the three solutions above.

Concerned readers can call on their own state representatives and members of the Budget and Finance Committee to support SB 1281 and SB 1293. Supernova Women offers contact info and a sample script on the Take Action section of their website.

That won’t be the end of the fight for weed justice, but a win would at least earn us a break to circle up and celebrate with some adult-use goodness.

Learn more about how you can take action at supernovawomen.com.