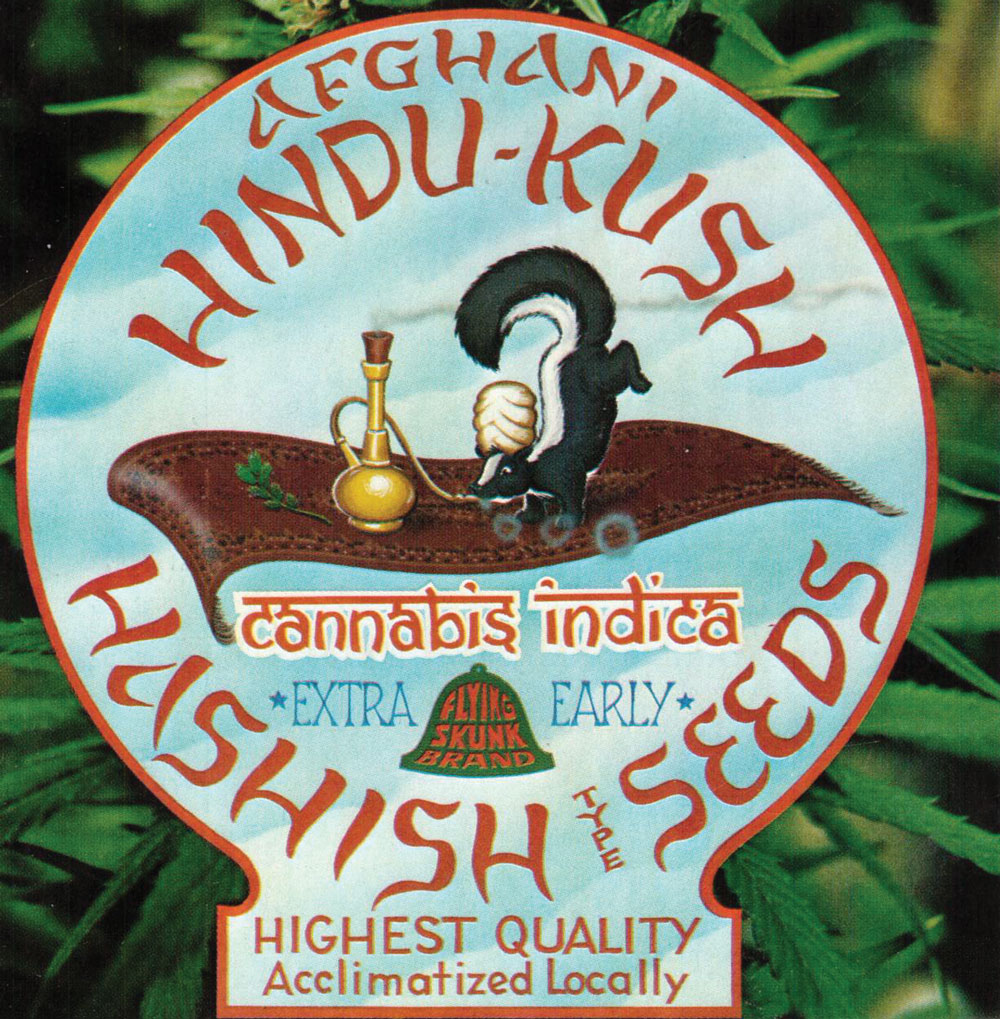 In the ’70s, seeds from Santa Cruz County became the basis for a worldwide weed movement. Here’s what happened when I found some of them

A woman walks towards me on Seabright Avenue in Santa Cruz. She is fastidiously buttoned up and well-heeled, carries a tiny dog, and is clearly from out of town.  She stops me, and asks “Do you live here?”

I nod, “They’re shy. They like to stay in the backyard.”

It’s fun to razz the occasional out-of-towner, but we all know what they’re really smelling. The pungent Skunk strain of cannabis is the legendary genetic building block of thousands of strains produced today. What most people—even locals—don’t know is that it was first developed and grown in Santa Cruz County 50 years ago.

I tend to miss the most obvious connections. In the late ’70s, long before I heard of Santa Cruz being the epicenter of the Skunk cannabis growing world, I briefly served as a singer and guitar player for a country-rock band called the Skunk Band. We opened for Larry Hosford.

When I asked the Skunk Band’s leader where they got the band name, he handed me a joint. I still didn’t get it. I was all-in on being a hippie, but was stupidly naïve. While I was too innocent and dense to appreciate the band’s name, I did appreciate how I played my guitar on their pungent weed—it gave me an uncanny ability to focus on detail. I could look at the fretboard of my guitar and see all the notes as if it was the keyboard of a piano. Transposing a complex guitar part to a different key was effortless. Man, did their weed smell. My stint with the Skunk Band faded from memory, and I forgot about them and their weed for 40 years. Then I met Wayne.

The Man with the Seeds

In 2018, I moved to Watsonville when I found a farm in the vineyards that let me set my Airstream trailer up as a Santa Cruz County crash pad. That’s when I became friends with Wayne, who would not stop rattling on about his frozen weed seeds. At first, it all sounded like stoner babble, but little by little, his ramblings about his seeds and some character he called “Sam the Skunkman” began to form a larger tale. I started researching the story of Sam the Skunkman, who turned out to be a legendary figure in the cannabis world. And Wayne’s story turned out to be true. It went like this:

In 1978, Wayne bought 100 seeds of Flying Skunk from Sacred Seeds. He paid $1 a seed from a guy named David Watson, who developed the cannabis seed strain in Watsonville and later became known as Sam the Skunkman.

But life happened, and Wayne could not grow out the seeds. He read on the back of the seed package that they would keep much longer if they were frozen—and that’s what Wayne did. He froze all one hundred seeds. Like Bilbo Baggins’ obsession with the Ring, Wayne never could stop talking about his frozen seeds.

In researching this story of the first Skunk strain and Sacred Seeds, I spoke with three Santa Cruz seed producers from the ’70s about Skunk—and I got three different stories. As this was an outlaw subculture at the time, there was pretty much zero documentation, so I can’t say for sure if everything they told me is true. All I know for certain is that these guys can smoke me under the table.

I have no idea if the controversial Sam the Skunkman is a genetics genius, a marketing genius, a benevolent scientist, or a fast-talking opportunist. Maybe he is all of those. His story has become legend, and while we may each believe different portions of it, I take the legend itself as a piece of folklore for our times. Whether you accept Sam the Skunkman’s story as Johnny Appleweed or not, he did create the first cannabis seed company in the country, called Sacred Seeds. The seeds he sold in 1978 were called Flying Skunk, a strain that became the building block for thousands of strains we grow today. He did escape the clutches of the law and steal back his seeds. And we also know that the first strain of Skunk was lost.

The legend goes that before he took his seeds to Amsterdam in 1982 and became Sam the Skunkman, our hero called himself David Watson. (Hmm, a pothead dodging the law to grow a plant that is a felony moves to Watsonville and calls himself Watson. Sure, why not?) His former associate Phil Noland tells me Watson used a tiny greenhouse 10 feet by 20 feet in the ’70s to combine Columbian seeds (sativa) with Afghani, Pakistani and Indian seeds to bring down the enormous height of his pure sativa plant and mitigate the odor to make it more grower-friendly. He also wanted to reduce the long maturation period of the pure Colombian strain. Look at the front of the Flying Skunk seed package from 1978 and notice the thin blue font that says, “Extra Early.”

After a police stakeout and bust of his Watsonville seed operation in 1982, Watson sneaked back onto the crime scene and stole back his seeds from the cops, making off with 250,000 seeds that ultimately changed cannabis history. He took his seeds to Amsterdam to share them with Nevil Schoenmakers of the Seed Bank of Holland, which started the development of Skunk-based sativa brands that proliferate worldwide today. At that point, David Watson became known as Sam the Skunkman.

Wayne knows a lot about his seeds, “The intense odor of this first strain led many to call it Roadkill Skunk. During his breeding program at the Amsterdam Seed Bank, Nevil lost the Skunk male,” he says. “They had to replace that male with a male from another strain.”

That is one part of the story that is universally agreed upon—while developing and crossbreeding many different strains, Nevil Schoenmakers somehow lost the original Skunk male flower. He had to replace that male with male flowers from a different strain. The first pure Skunk is lost. Gone. Extinct. Unless some crazy hippie had a stroke of cryogenic genius, the first Skunk is no more. That amazing weed I smoked with the Skunk Band 43 years ago is gone like smoke in the wind, and it would be preposterous to think that some nutso stoner froze the original Skunk seeds. But Santa Cruz is where preposterous happens. Wayne is our nutso.

What is this strain called Skunk? It is very high in Sativa, which makes you creative, focused, inspired, and happy. Skunk is not like the heavy Indica-based dispensary herb that is so popular with young folks. My son turned me on to cannabis that looked like brown glass, a dab of concentrate. We used a blowtorch to smoke it out of a quartz bowl, at which point I renamed it Flat On My Back on the Floor Weed because that’s how I ended up. Sativa will not make you pass out on the floor. Sativa may make you dance on the floor. It may make you paint the floor. It may make you think you are the floor, but it will not knock you out.

I’ve got absolutely nothing against the idea of passing out, and if you want to do that, delve deep into Indica. It’ll make your body feel good. But if you are trying to brainstorm what you could say to your wife about last weekend, Skunk is your junk.

In February of 2020, Wayne gave me 40 of his seeds. We didn’t know if they would sprout. I felt like Frodo putting on the Ring for the first time as I lay the seeds between damp paper towels on a plate. Were these seeds too old to germinate? I found myself looking at them throughout the day, keeping the towels damp. On the third day, one cracked open, and a tiny white sprout appeared. Over the next two weeks, 38 of the 40 seeds sprouted at an incredible germination rate. I put the sprouts in potting soil, and in May, I replanted them in the ground. They grew so tall I had to cut their tops off four times.

The leaves were narrow and dark green, but the thing was the smell. My Airstream is one hundred feet from the hoop house, and inside my trailer, it smelled like I lived with a skunk. If anyone in the neighborhood wondered if I grow pot, they know now.

We were going for seed production, so Wayne shook the male flowers all over the female flowers when flowers formed. (And this at the height of the #metoo movement!) I kept trimming the tops. In mid-November, we hung the plants upside down in a shed. And finally, it was time.

My first inhale did not do all that much. I inhaled again. I felt pleasant enough, but I also wondered if this weed works. Was the legend of the first Skunk strain bullshit? I hit it a third time, deep. Then I looked at my guitar fretboard and could see all the notes like I was looking at a piano keyboard. I thought of the Jimi Hendrix chord (E7 #9), and a way to play it above the twelfth fret appeared in relief on the fretboard. In euphoria, I played with intense focus. Would Aldous Huxley say that I had opened the “doors of perception?”

Wayne loves his seeds so much he has a vision for them, “I found something heritage that people love. So how do I share it?” he wondered.

Wayne’s vision is that everyone who wants to feel great could start by germinating 12 seeds, discarding the males and growing the six plants that California allows. Nice vision. Wayne thinks of himself as a holy man. Wayne is a holy man; he has a colostomy bag piped into his gut.

He and I sit on his porch smoking the flowers grown from his time capsule Skunk seeds, and I ask him how it makes him feel.

“It’s the most creative weed I’ve ever used,” he says. “You start laughing, talking; it puts you in a good mood. It’s more fun; it’s happy weed. In high doses, it gets psychedelic.”

Wayne’s mission is to figure out how to legally distribute these seeds to anyone who wants to grow sativa cannabis. “It’s the kind of weed you can smoke in the daytime,” he tells me.

The way I have encountered this psychoactive strain repeatedly over the years makes me think there is something beyond coincidence here. In the end, the story of the Skunk strain is a circle that coheres—a circle of legend, of genetics, of a place that believes in its own magic, and of our desire to open Huxley’s “doors of perception.”

If you want to learn more about these seeds and the Santa Cruz Mountain Seed Company, please contact me at [email protected].