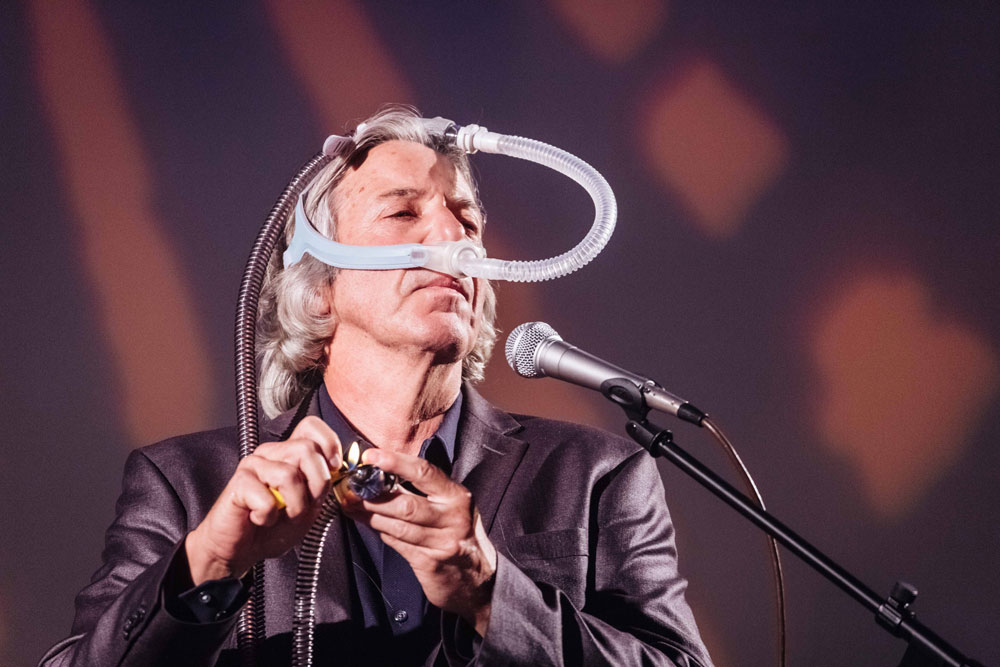 At the end of my solo show Life Is Too Snort, I put a CPAP mask on my face, pack weed into the other end of the air hose, and then pretend to light the weed on fire, inhaling through my CPAP mask. That’s my closer— and the audience screams.

Pot humor used to be underground. It had an illegal vibe. Even now, I am leery about using my marijuana material on older, more conservative crowds. One night last week, I performed Life Is Too Snort at a 55+ community in San Diego, and I asked the show’s producer if he thought I would alienate them with my weed jokes. He laughed and said, “I think you’ll be surprised.” When I told the crowd, “What’s the worst thing about smoking too much pot? You run out!,” a tiny woman of maybe 80 slammed the table with her fist and yelled, “I’m out now!” I closed the show by smoking through my CPAP mask, and afterward three women asked me if I could get them weed. (It’s one of my regrets—why didn’t I just become a drug dealer?)

The audience for cannabis comedy is now mainstream, but how does weed effect the comedian’s writing and performance? Well, comedy uses the principles of improv; no matter what you come up with, you go “Yes, and…,” and then add something new. Your critical voice will assault you with various reasons each joke doesn’t make sense, or isn’t funny. When the critical voice says, “Yes, but…” creativity stops. Weed can help you focus on the moment and get to “Yes, and…”.

George Carlin said that he first wrote his jokes straight, then got high and went back over them. Carlin’s first “straight” pass kept his topics relatable, and the herb pass made them funnier. Comic great Dan St. Paul remembers writing while very high on shrooms, “We found the number 17 to be so hilarious, laughed for an hour. We tried the number 16. Nothing!”

I can focus on one thing with Zen intensity when I’m high. When cranking out the comedy for my “Fried Comedy News” radio rants on KPIG, pot can give me stamina. When the morning caffeine starts to wear off, and I can’t write or record anymore, I can light up and go four more hours.

But performing comedy is different for me. When onstage, it does not work for me to have that high weed-attention to detail. I’m trying to be hyper-aware of every person and every sound in the room, and integrate all of it into my dialogue with the crowd. Engaging 200 people takes macro-vision, not micro. This is not something I can do high.

This drug is so benign that people share it with their pets—it’s rare to go over to a meth addict’s house and see him chase his cat around with a syringe. Weed has become mainstream, and at comedy shows it is sometimes more pervasive than alcohol. I can tell who in the audience is stoned by who laughs at this joke: “Pot can make you paranoid. When you get really high, you might decide you can walk on a beam of light, but you become afraid that someone will turn it off and you’ll fall down.” If you don’t think that’s funny, get high and try it again.

With A Little Help From Ringo

One time I opened for Ringo Starr and His All Starr Band at the Mountain Winery in Saratoga. It is officially a 2,500 seater, but was so packed that people were sitting on branches of the trees. As I walked to the microphone, a dense cloud of blue, sweet smoke rose from the seated crowd and rolled over the stage. It was like 3,000 people shotgunned weed directly into my face.

Three jokes into my act, it was clear the audience could not get my punch lines, because they couldn’t remember the setups. But it didn’t matter, because after breathing that smoke, my rehearsed bit list became a distant memory. So I put on my guitar, mimicked Peter Townshend’s windmill move, swung my arm around and around in a windup and smash a power chord. The crowd erupted into a yell like a volcano in slow motion. I played my funny songs and they clapped along, not in time but con brio. When they started laughing, I was high as they were. Suddenly my 25-minute set was over. They liked me. Not the loudest applause I’ve ever gotten, but definitely the slowest to take form.

As I walked down the stairs to exit the stage, I passed Ringo and the All Starrs coming up. When Ringo and I landed on the same step, he stopped, tilted his head back, pointed a bejeweled finger at me and said, “Boys, now there’s a funny one.”

And Ringo is a funny one. Two young women, maybe 20 years old, were jumping up and down, screaming, “Ringo, we love you! Ringo, we want you!” Ringo looked at them and quipped, “Oh, I hope they’re not my children.”

What I learned last week from my Life Is Too Snort show in San Diego is that everyone loves to laugh, and everyone loves to take drugs. What if we embrace those we can’t understand with cannabis and comedy? Canamedy! Maybe marijuana and laughter is the bridge our polarized society needs. A harmonious sanctuary. Giggles and ganja. Maybe the best way to connect with someone with an opposing worldview is to laugh at what you agree on, and then get so high you both can pass through a portal to see the world with a new view. Pass the dutchie on the left-hand side and say “Yes and…” to each other until you find a truth that makes you both laugh.