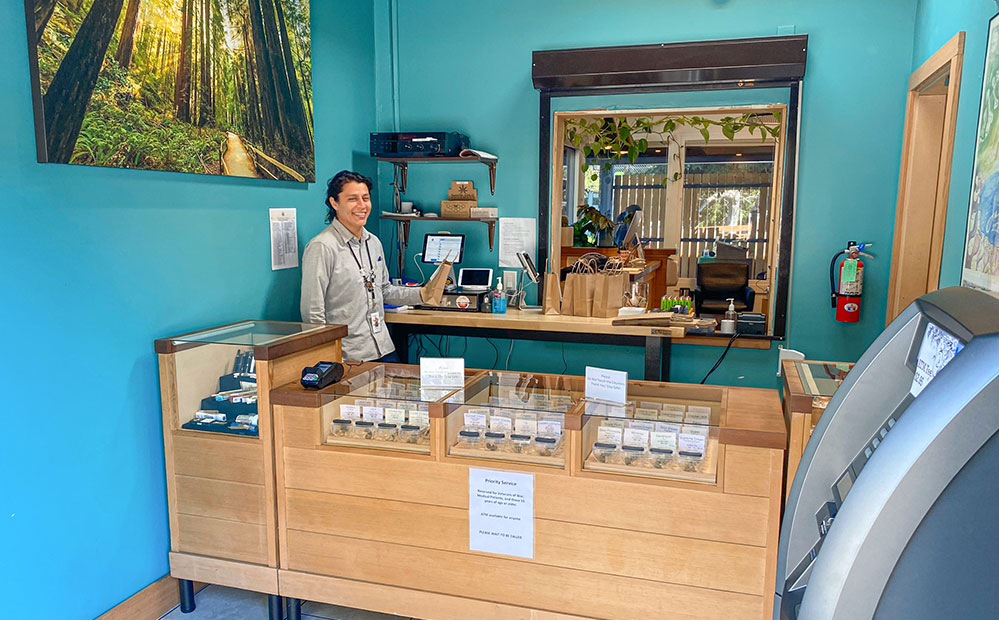 The local cannabis business is booming right now, but will the good times last?

Demand and average sales figures at Santa Cruz County cannabis dispensaries may be (way) up since the state enacted its sweeping shelter-in-place mandate, but no business, not even those in the red-hot cannasphere, are immune to the effects of coronavirus.

Even though marijuana is widely considered a “non-cyclical,” capable of weathering (and sometimes flourishing in) tough times and economic downturns, the nasty little virus has put considerable pressure on the cannabis industry.

Officials in Santa Cruz County, like many other municipalities across California, have deemed cannabis dispensaries to be “essential,” allowing them to remain open alongside supermarkets, pharmacies, gas stations and banks. However, unlike almost all other essential businesses during these trying times, operators in the cannabis space are barred from receiving any and all federal assistance because the crop is still illegal at the federal level. That means dispensaries will not see a dime from the gargantuan $2.2 trillion Coronavirus Aid, Relief, and Economic Security (CARES) act.

“They are dependent on customer transactions to survive. If customers stop coming to them, that’s a big problem,” says Santa Cruz County Administrative Officer Melodye Serino.

According to the federal government, cannabis is a Schedule 1 controlled substance, so dispensaries, growers, cultivators, those doing lab testing and distributors won’t receive a crumb of the economic recovery package. If capital gets tight—and it has for many operators—there’s often no one to turn to. Banks can be prosecuted for conducting any business with cannabis companies, so loans (aside from the high-interest private sector) and cash for daily operations can be hard to come by. And due to the federal illegality of cannabis, dispensaries are precluded from taking federal tax deductions for their operating expenses.

“For cannabis businesses to be deemed essential but not eligible for any federal relief, it’s a bold contradiction between state and federal policy. It’s huge,” says Colin Disheroon, CEO of Santa Cruz Naturals. “We’re essential businesses that don’t get any tax relief, must conduct transactions without credit cards, and aren’t given any employment relief. Plus, we’re taxed heavily at all levels of the industry. All of these things may not impact us right now, but 2-3 months down the road… the cannabis industry finds itself in a potentially dire situation.”

Today, business for most players in the local cannabis industry is strong, but some wonder and worry whether the industry can sustain itself in the face of an uncertain future and global pandemic.

“I think all of this will be good for us, but not for a lot of people. Especially those without a delivery license. Which is pretty much everybody,” Cole Hembree, owner of Curbstone Exchange Dispensary, tells Cannabis Chronicle. He fears that the other 15-plus brick and mortar dispensaries across Santa Cruz County may have to close their doors—at least temporarily—in the wake of the rapidly changing global pandemic.

In other parts of the country, things in the cannabis space are markedly changing—and not for the better. Nevada Governor Steve Sisolak recently declared that all recreational and medical dispensaries must close their storefronts immediately. The Nevada Department of Taxation effectively outlawed curbside pickups of herb overnight. Don’t start crying for all of those Nevada potheads though. Cannabis will still be available, but only by delivery. With 38 dispensaries delivering cannabis across the state, Nevada consumers will get their weed—they might just have to chill a bit.

Santa Clara County’s top officials recently decreed that dispensaries would no longer be allowed to sell recreational weed to customers at their brick-and-mortar locations. South Bay weed purveyors are allowed to sell medicinal marijuana in their interior spaces (and by curbside), but recreational users must now use a delivery service to receive their medicine. Some dispensary owners, especially those who don’t (or can’t) offer delivery service, are irate. By barring recreational or “adult-use” customers, they contend, the county is virtually eliminating the majority of their day-to-day business. To put things in perspective, only 3 to 5 percent of South Bay cannabis consumers do so with a doctor’s rubber stamp.

While cannabis is deemed “essential” in most counties, licensed dispensaries face an uncertain, and somewhat terrifying, future. “Right now we’re open for the public, but that doesn’t mean we’ll be open tomorrow,” says a manager at Capitola’s Herbal Cruz Dispensary.

“I think things are going to get worse—not better. People need to listen. And no one listens. I think they are really going to shut everything down. That is what is going to happen in Santa Cruz,” the manager says.

What will happen if local dispensaries are forced to shut down in the wake of a citywide—or nationwide—quarantine? Where, and how will residents get their medical and recreational cannabis? The black market in Santa Cruz County will no doubt rise, flooding the area with untested, unregulated, possibly toxic, breathed-on and handled products. And dispensaries who deliver, like Hembree’s Curbstone, will probably need to buy more cars. But in all seriousness, many people could suffer.

“We have a large clientele who are medical patients. A lot of veterans, and members of the general public, coming into our shop and needing their medicine. To an extent we act as a pharmacy. The effects of us having to close our dispensary would show up almost immediately. It wouldn’t be good,” says Bruce Valentine, a budtender at the Santa Cruz Veterans Alliance (SCVA).

Through its Veterans Compassion Program, SCVA serves around 150 veterans each month by handing out vouchers redeemable at its own dispensary. Local veterans each receive 8 grams of SCVA’s own flower at no cost. Without a physical dispensary, this program may be interrupted.

Access to and hours are severely impacted in countries like Italy, but pharmacies remain open for business. But how will dispensaries, who often act as de facto pharmacies themselves, be treated and effected if similar quarantines and social distancing measures are implemented on a national level here in the United States? We’ll most likely have to wait and see.